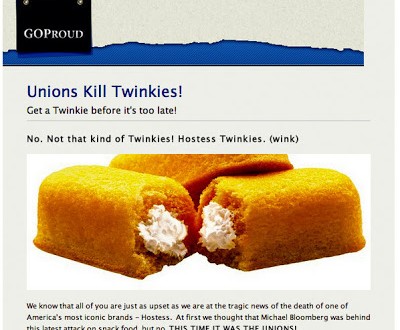 GOProud today sent out a fundraising letter blaming those communist unions for the demise of Hostess Brands and offering to send donors a Twinkie in return for a $50 contribution. Chris Geidner has the text:

You know that our staff at GOProud works every day free market principles and freedom for everyone. You may not know about our special emergency response squad. This morning when the news broke, they sprung into action and secured a supply of the coveted snack cakes. We now have a stash of Twinkies in the GOProud vault. You have a chance to take advantage of our quick response to this crisis. We will share our limited supply of Hostess Twinkies with GOProud donors who contribute at least $50 between now and the end of November.

And for an EXTRA $50, Jimmy LaSalvia will personally train you on how to fake an anti-gay hate crime!

UPDATE: As for GOProud’s tired and predictable claim about unions, the management of Hostess Brands sure isn’t suffering.

BCTGM members are well aware that as the company was preparing to file for bankruptcy earlier this year, the then CEO of Hostess was awarded a 300 percent raise (from approximately $750,000 to $2,550,000) and at least nine other top executives of the company received massive pay raises. One such executive received a pay increase from $500,000 to $900,000 and another received one taking his salary from $375,000 to $656,256.

Previous Walking For A Cause
Next Newspaper Ad Of The Day