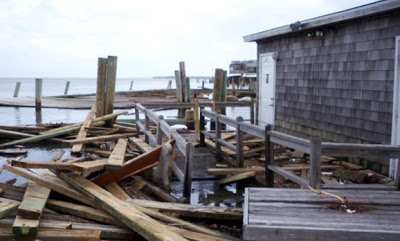 Fire Island, which is arguably the most famous gay vacation destination in the world, was devastated by Hurricane Sandy. The damage is so severe that the spokesman for the National Seashore believes that at least one new permanent inlet between the bay and the ocean has been created, effectively dividing Fire Island into two separate islands. Steve Weinstein has the story at Edge:

The Pines may have experienced at least one extensive breach on its eastern end, with another even more severe breach just east of the Pines, according to Jay Pagano, who heads the local property owners assocation. In an email statement, Pagano said that pools and decks of houses fronting the ocean along a wide swath of the Pines were extensively damaged.  In a later email, he reported that flooding is “quite extensive,” with “debris and trees down throughout the community.” Many of the boardwalks that are Fire Island’s sidewalks are destroyed, as are all of the Pines’ stairs that lead from the boardwalks to the beach, Pagano reported.

Much more serious is the destruction of the dunes “along the length of the community.” The dunes are the front line of protection. The Pines has been involved for several years in expensive dune restoration. [snip] In an telephone interview with CNN’s Wolf Blitzer, Karen Boss described the Pines Harbor as “completely submerged.” Photos of the harbor show water going well onto land. In addition, there are reports that many of the bulkheads along the bay built have been destroyed. The bulkheads, built on community and privately owned property, serve to protect the island from erosion. But they couldn’t withstand the surging onslaught of water caused by Sandy’s high winds. This is the second year in a row that a mid-fall natural disaster devastated the Pines. Last year, a fire swept through the downtown harbor area. The destruction encompassed much of the commercial property, including the town’s main bar and nightclub.

Many photos of the destruction can be seen here and here.