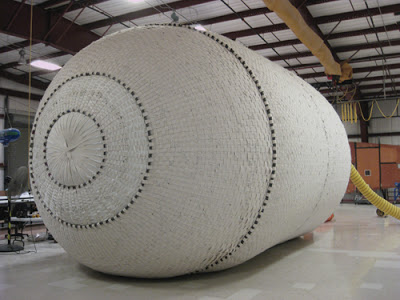 In the wake of widespread flooding to most of New York City’s subway and vehicle tunnels, Homeland Security has renewed testing of a giant inflatable plug.

The Resilient Tunnel Plug has been years in development and testing, but it may be more relevant than ever: Superstorm Sandy sent a record 14-foot storm surge into New York Harbor, flooding subway tunnels that move some 5.2 million people a day. There is no telling how well ILC Dover’s Resilient Tunnel Plug could have helped prevent damage, “but that’s the kind of thing we’re designing these things for,” Homeland Security spokesman John Verrico said Thursday as the latest testing got under way in an airplane hangar.

Packed like an air bag, the oblong balloon made of Space Age materials flopped out of the wall of a scale-model subway tunnel that WVU engineers developed several years ago, inflating in about two minutes. While contact sensors monitored the pressure, engineers with WVU, ILC and the Pacific Northwest National Laboratory visually inspected the edges to see how tightly the tube filled the tunnel. A proper fit is critical to the plug’s success, said John Fortune, project manager for the Department of Homeland Security. “If there’s not a good seal, we’re going to see substantial flooding,” he said. And while there will always be some leakage, the goal is to make it minimal.

Climate change? Feh! We got plugs!