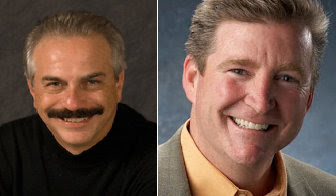 Eating Their Own: World Net Daily Attacks “Wimpy” Focus On The Family

World Net Daily founder Joseph Farah today attacked Focus On The Family, saying that they helped the GOP fail because they don’t hate gays hard enough. (That’s news to US.)

I could go on and on with reasons Christians are losing the culture. In fact, I would have to say they’ve already completely lost it. Abandoned it would be more accurate. Into this sad state of affairs comes the “refocused” Focus on the Family, a truly great Christian ministry founded by a truly great man, Dr. James Dobson. But like many great cultural institutions founded by great Christian men – Harvard, Yale, Princeton, Columbia, the New York Times, yes, even the United States of America – it lost the Christian vision and passion of the founders. What am I talking about? I’m talking about the new non-confrontational, wimpy, smiley-faced, lukewarm Focus on the Family as personified by its new leader, Jim Daly, who seems all-too eager to distance himself and the organization he now heads from the legacy of Dobson. Daly’s answer is to find common ground with people who understand they are indeed in a culture war – those, for instance, who promote same-sex marriage and advocate unrestricted abortion. We’ve got to be more “ecumenical,” to “win over friends, not make more enemies.” That’s how fast Christians lose cultural institutions.