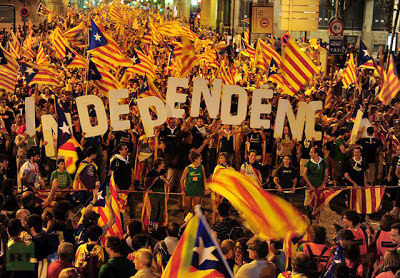 Spain’s Catalonia region is voting today on secession. If the pro-secession party wins a majority, a referendum on independence would likely follow within two years.

More than 8,000 polling stations opened across the northeastern region at 9 a.m. local time today to select 135 lawmakers who will decide whether to press on with regional President Artur Mas’s plan for a referendum on independence. Voting ends at 8 p.m. with exit polls expected soon afterward. The first results may be announced as early as 8:30 p.m. Catalans are set to hand nationalist parties a majority in the regional parliament, putting them on a collision course with Rajoy’s national government in Madrid, which has held that a referendum on secession would be unconstitutional. Mas was on track to claim 62 seats and the separatist Catalan Republican Left another 18, according to a Metroscopia poll published Nov. 18 before the pre-election blackout period.

In September more than 1.5 million Catalans demonstrated for independence in Barcelona.