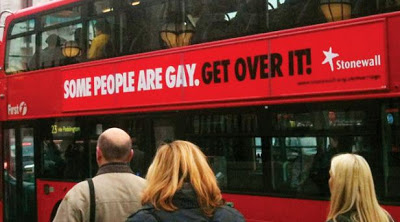 Passengers spent 20 minutes stranded on a bus after its driver refused to board because of a gay rights message on the side. The unnamed driver would not get on the X78 from Rotherham to Sheffield because it bore a billboard for gay lobby group Stonewall, reading: ” Some people are gay. Get over it!” Passengers sat and waited while the driver argued loudly with colleagues and customers. A spokesman for bus operator First Group would not divulge what action — if any — had been taken against the renegade driver.”We are aware of an incident involving one of our drivers refusing to drive a bus at Rotherham Interchange. We have spoken to the driver in question and the matter has now been resolved. We would like to apologise to any customers that were affected during this isolated incident.”

Eventually another bus came along and that driver took over.