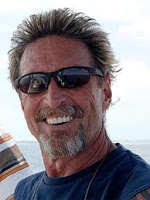 John McAfee, the man who founded the company whose anti-virus software resides on hundreds of millions of computers worldwide, is being sought for murder by police in Belize.  Gizmodo reports:

According to Marco Vidal, head of the national police force’s Gang Suppression Unit, McAfee is a prime suspect in the murder of American expatriate Gregory Faull, who was gunned down Saturday night at his home in San Pedro Town on the island of Ambergris Caye. Details remain sketchy so far, but residents say that Faull was a well-liked builder who hailed originally from California. The two men had been at odds for some time. Last Wednesday, Faull filed a formal complaint against McAfee with the mayor’s office, asserting that McAfee had fired off guns and exhibited “roguish behavior.” Their final disagreement apparently involved dogs.

Gizmodo notes that McAfee is well-known for his passion for psychoactive drugs.  Intel purchased the McAfee corporation for $7.6B in 2011, but John McAfee had cashed out many years earlier. He reportedly lost almost all of his estimated $100M fortune in the stock market before moving to Belize in 2008.

RELATED: Before founding his anti-virus company, John McAfee spent time in the late 80s selling identification cards which “certified” that bearers of the cards were HIV-negative.

Previous Out Bisexual Wins U.S. House Race
Next Jesus Came For You