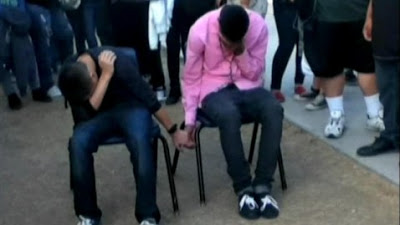 ARIZONA: Principal Punishes Boys By Forcing Them To Hold Hands

An Arizona high school principal has punished two fighting boys by forcing them to hold hands in front of the entire school and thereby allow fellow students to cruelly mock them as homosexuals. The boys were so humiliated, they shielded their faces rather than face their taunters.

Earlier this week, the two students at Westwood High School in Mesa, Ariz., who have not been named, were faced with the prospect of either suspension from school, or sitting in chairs in the high school’s courtyard and holding hands for 15 minutes during a lunch period. They opted for the latter. “Kids were laughing at them and calling them names, asking, ‘Are you gay?’” student Brittney Smyers told ABC affiliate KNXV. Teens at the high school inevitably posted photos of the two, who spent the time shielding their faces with their heads in their hands, to social media sites. On the Facebook posting, users commented that the public punishment is not appropriate, as it positions the teens as targets for taunting and name-calling. Others suggested the punishment was anti-gay, as it implies two males holding hands is embarrassing.

The Mesa Public School District issued a statement: “The district does not condone the choice of in-school discipline given these students, regardless of their acceptance or willingness to participate. District leadership will address this matter with the school principal and review district protocol regarding student discipline with all administrators.” (Tipped by JMG reader Todd)