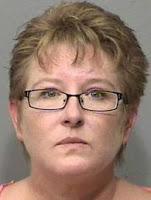 A member of the anti-gay Alliance Defense Fund, which has filed numerous lawsuits in opposition to LGBT rights nationwide, has been arrested on multiple felony charges related to child pornography.

A Manchester lawyer took a teenage girl to Canada, had her engage in sexual activity and convinced her to let it be filmed, according to federal indictments. FBI agents swiftly arrested Lisa Biron yesterday morning as she awaited a hearing on child pornography charges at Manchester’s district court. About 9 a.m. FBI agents entered the courtroom, told Biron to leave her belongings and took her into an adjoining conference room where she remained for several minutes before coming out in handcuffs. Outside, Biron ducked her head below the backseat window of a white vehicle as it was driven away from the courthouse. A few hours later in U.S. District Court in Concord, Biron, who is associated with a national coalition of Christian lawyers, was formally told of the federal charges against her: transportation with intent to engage in criminal sexual activity, possession of child pornography and five counts of sexual exploitation of children. Judge Landya McCafferty decided to detain Biron yesterday, largely, she said, because she is believed to have broken most of the bail conditions imposed on the district-level pornography charges.

Bolding is motherfucking mine. In July of this year, the Alliance Defense Fund changed their name to Alliance Defending Freedom. Hit their label on this post for just a few examples of the many, many times they have attempted to inflict Christian Sharia Law upon unwilling Americans.(Tipped by JMG reader Stev84)

Previous More Madness In The Allen West Recount
Next SPOILER: The Walking Dead