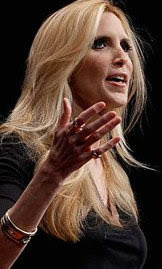 Ann Coulter: There Are Too Many Hispanics

“Liberals brag about having won the hearts and minds of America, as if, through logic and argument, they’ve persuaded people to accept their bankrupt European socialist ideas. Democrats haven’t changed anyone’s mind. They changed the people. More white people voted for Mitt Romney this year than voted for Ronald Reagan in 1980. Barack Obama lost white voters by 20 points — the widest margin since 1984. But in 1980, whites were 88 percent of the electorate. In 2012, they were 72 percent of the electorate. Not only that, but the non-white electorate is far more Democratic than it was in 1980. If the same country that voted in 1980 had voted in 2012, Romney would have won a bigger landslide than Reagan did. [snip] The only hope is to run another appealing Republican candidate in four
years — when we’re not up against an incumbent president — and return
our immigration policy to one that helps America and not just the
Welfare Party.” – Ann Coulter, lamenting not that the GOP failed to appeal to Hispanics, but that there are just too many Hispanics.