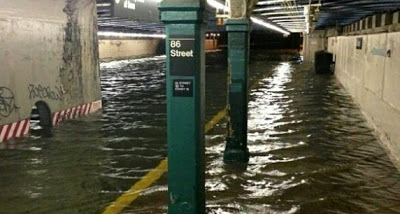 New York’s subway system may take weeks of work and tens of billions of dollars to be restored to full service as officials assess the toll from floods, hurricane-force winds and electrical damage that crippled the most populous U.S. city’s transportation hub. “I can say unequivocally that the MTA last night faced a disaster as devastating as it has ever faced in its history,” Metropolitan Transit Authority Chairman Joe Lhota said at a news conference today. “The first step is getting the water out,” Judy Glave, an MTA spokeswoman, said by telephone. “You can’t even start until the levels go down.” The MTA operates the New York City subway and bus system; the Metro-North and Long Island Rail Road commuter lines; and several intrastate bridges and tunnels.

Everything, including the electrified third rail, will have to be cleaned before power can be restored. Anything damaged will have to be replaced. “Salt water is corrosive,” Glave said. “Every bit has to be cleaned off. It’s a massive job.” The task will involve inspecting each of thousands of connections for the signal system that detects where trains are on its lines, Downey said. A similar system failed on Washington’s subway system in 2009, causing the deadliest crash in its history. “It’s an enormous amount of wiring and an enormous amount of connections that go to what’s called relay rooms,” Downey said. “They’ve got to turn the system on and if it seems to be working I think they’ve got to go to every component and check it and get rid of all the salt. What you don’t want is a short circuit that causes the system to fail.”

RELATED: New Jersey Gov. Chris Christie says it may be seven to ten days before PATH train service to Manhattan can resume. Amtrak will begin limited service on the northeast corridor tomorrow.

Previous GOProud Is Thrilled That Rush Limbaugh Took A Call From A Fellow Homocon
Next Romney: I’m Your Leader