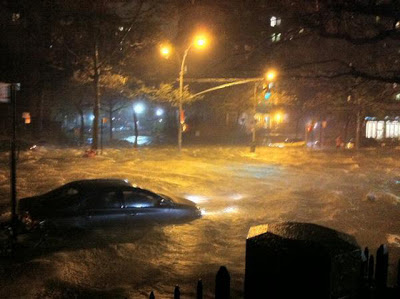 There are multiple reports of flooding across the city due to the storm surge from Hurricane Sandy that is now upon the city. There have been reports of people trapped and cars floating in the middle of the streets. We’ve also received reports that many subway lines throughout the city have been flooded as well. The city has now issued a warning to all New Yorkers to go indoors immediately, stay away from windows, and remain indoors until further notice.

Earlier tonight came the report that the storm surge has broken the all-time record of nearly 12 feet that was set in 1821. And it appears to be growing. The MTA’s site is down but local television reports that subway service will not likely be restored for several days at the earliest. First floor shops at the South Street Seaport are reportedly completely underwater.  The bridge connecting the A train line to the Rockaways is also submerged.

UPDATE II: The above tweet from the Weather Channel is being debunked by the NYSE itself.

VIDEO: The Con Edison station in the East Village has apparently exploded. Video was taken from the far side of the East River.