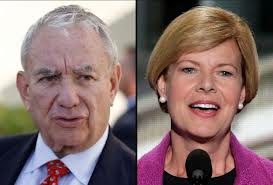 Tammy Baldwin is holding onto a slim lead in her Senate race.