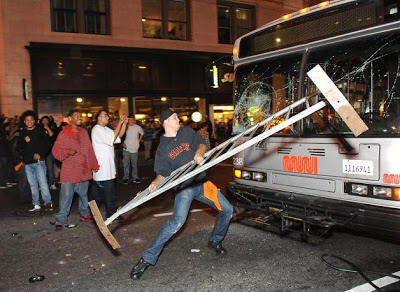 SF’s MUNI Vandal Has Been Busted

A Chronicle photo of the man smashing the front window of the bus during post-World Series celebrations was widely circulated online, and police say tips led to the arrest of Gregory Tyler Graniss, 22, of San Francisco. Graniss was booked Tuesday night on charges of felony vandalism and injuring or destroying a passenger transit vehicle. The latter charge is also a felony. “This was a senseless act of destruction and there is no tolerance for such criminal behavior in San Francisco,” police chief Greg Suhr said in a release. ”With assistance from the public, investigators moved swiftly to identify this suspect and make an arrest. Investigators are also working tirelessly to identify those responsible for setting the bus on fire and to bring them to justice.”