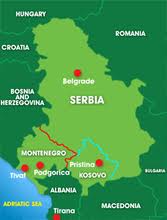 Police said they are banning the march planned over the weekend because they fear a repeat of the violence in 2010, when right-wing groups attacked such an event in Belgrade, triggering day-long clashes with the police that left more than 100 people injured. Last year’s gay pride march also was banned by authorities. The current ban was announced after Patriarch Irinej, the head of Serbia’s Christian Orthodox church, urged the government to prevent Saturday’s march. He said in a statement that such a “parade of shame” would cast a “moral shadow” on Serbia — a very conservative Balkan country whose gay population has faced threats and harassment.

RELATED: The neo-Nazi organizers of anti-gay violence at Belgrade Pride in 2010 were sentenced to prison last year. Over 200 anti-gay demonstrators were arrested on that day but only a handful were tried.  Last year’s Belgrade Pride was cancelled also after police said they could not devote the estimated 5000 riot police needed to protect parade attendees from expected protesters. Police had already arrested six men in the possession of ski masks and baseball bats.