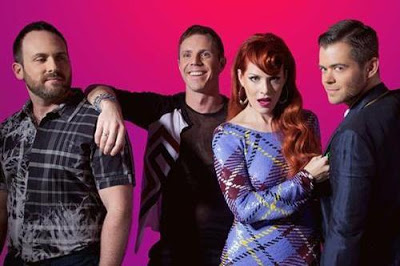 Last night in London, Scissor Sisters announced that the band is going on an indefinite hiatus.

The New York band performed their second of two nights at the North London venue, playing an extended set as a thank you to fans – announcing their separation towards the end of the show. Frontman Jake Shears told the audience “This will be the last time we will play in London for quite some time,” after Ana Matronic thanked London fans, saying the UK audience was “The ones who got us first – and always get us best.” Following the show, band members confirmed to Gigwise that there were currently no plans for the band to return to the studio to record a follow up to their 2012 album, Magic Hour. Guitarist Del Marquis reveals he has solo work in the pipeline and Ana Matronic is close to completing work on a comic book project. The flamboyant singer reassured fans that this was not the end of Scissor Sisters, telling Gigwise “Don’t you worry – this isn’t the last you’ve heard of us,” at the official after party, held at Camden’s Lock Tavern.

Scissor Sisters formed in 2001. Since then they’ve released four albums, scoring three #1 US dance chart singles and landing ten tracks in the British Top 20.  I Don’t Feel Like Dancin’, their monster hit from 2006, reached #1 in more than a dozen countries.

UDPATE: Scissor Sisters frontman Jake Shears is telling fans on Twitter that this is not a permanent breakup. “It’s just a break!”