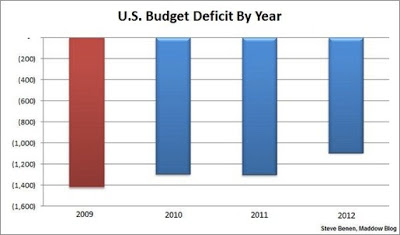 From the Maddow Blog:

When the president’s critics spin this, they’ll say, “The deficit was over $1 trillion again,” and that will be accurate. What the criticism fails to note, however, is that (a) the deficit is now much smaller than it was when Obama took office; (b) this is the smallest deficit we’ve seen in four years; (c) this new figure represents an improvement of over $200 billion since last year; and (d) the main drivers of the remaining deficit are Republican policies.

Previous Maya Angelou: Don’t Give Up Your Vote
Next Anti-Abortion Loon Randall Terry Goes “Street” For Attack On Samuel Jackson