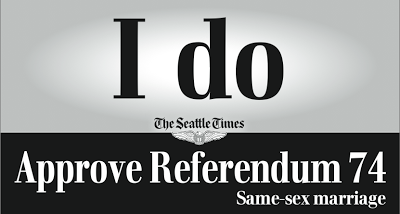 Neal Broverman reports at the Advocate:

According to Paul Bell, press secretary for Obama’s reeelection efforts in the northwestern state, “While the president does not weigh in on every single ballot measure in every state, the president believes in treating everyone fairly and equally, with dignity and respect. Washington’s same-sex marriage law would treat all Washington couples equally, and that is why the Presdient supports a vote to approve Referendum 74.”

UPDATE: Mainers United has released a message identical to the one above for Maine’s Question 1.

UPDATE II: And now we have the same press releases for both Maryland’s Question 6 and Minnesota’s anti-gay ballot measure.  It was an almost perfectly coordinated media blitz, with all four statements from the President’s regional reps coming in from all around the country within one hour.