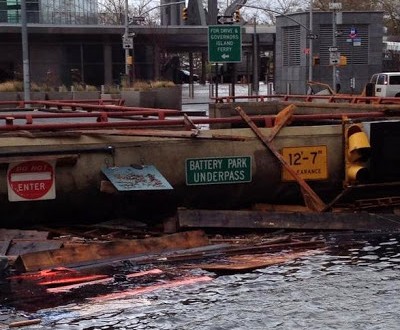 We’ve some good news and some not so great news.

Governor Andrew Cuomo says he expects JFK and Newark will reopen Wednesday, but that LaGuardia will remain closed because of storm-related damages. Rail service on AirTrain JFK and AirTrain Newark has been suspended until further notice. All East River Bridges are once again open to traffic. Additionally, all Port Authority bridges and tunnels will be open at noon Tuesday, with the exception of Rockaway bridges, the Brooklyn-Battery Tunnel and Holland Tunnel. The Queens-Midtown Tunnel remains closed. All MTA bridges are also expected to reopen Tuesday. The crossings include the Robert F. Kennedy, Throgs Neck, Bronx-Whitestone, Verrazano-Narrows, Henry Hudson, Marine Parkway-Gil Hodges Memorial, and Cross Bay Veterans Memorial bridges. All PATH train service and bus service out of the Port Authority Bus Terminal is suspended until further notice, according to the Port Authority. During the storm, storm surge levels peaked at 13.88 feet at the Battery, which was a new record. North shore flooding levels were at 13.4 feet at 11:20 p.m. Monday. Governor Cuomo says bus service will resume at 5 p.m. Tuesday on a Sunday schedule with no fare.

Crews are scheduled to begin pumping flooded subway tunnels after tonight’s high tide. Mayor Bloomberg estimates that it will be at least Saturday before full service may be restored. City businesses will have to decide if they want to try to open with limited staffing, many of whom live in the outer boroughs.

PHOTO: Above is the entrance to the Brooklyn-Battery tunnel below the State Island Ferry Terminal in lower Manhattan.  As you can see, the tunnel (at the time of this photo this morning) was flooded to its roof.