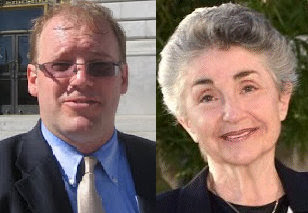 Last week Peter LaBarbera hosted anti-gay crackpot Judith Reisman on his radio show, where the two of them agreed that gay activists are demonizing Christians “just like the Nazis used to do to the Jews.” The Jewish Anti-Defamation League has responded with a press release denouncing the comparison.

No matter how strong one’s objections to any cultural, religious, or ethnic group or how committed an organization is to its mission, invoking the Holocaust and the Nazi effort to exterminate the Jewish people is offensive and has no place in civil discourse. While Holocaust analogies generate headlines and get attention, they do little in the service of truth, history or memory. When LaBarbera and Reisman suggest that gay, lesbian, bisexual and transgender people are “demonizing [Christians] like the Nazis used to do to the Jews,” they undermine the historical truth of the Holocaust as a singular event in human history that led to the murder of six million Jews and millions of others. Holocaust comparisons are deeply offensive and trivialize and distort the history and meaning of the Holocaust. We hope LaBarbera and Reisman will reconsider their words and refrain from invoking such analogies in the future.

RELATED: Later this month Reisman will keynote LaBarbera’s annual fundraising dinner in the Chicago suburb of Arlington, Illinois.  Shortly before last year’s event, where the keynote speaker was Scott Lively, LaBarbera claimed that gay activists threw a brick through the window of the Christian school that was to host the dinner.  Many continue to believe that the “attack” was staged to draw attention to the event.

Previous Religion Vs Science
Next GOProud’s LaSalvia On Fox News