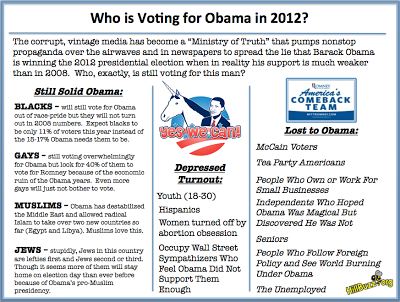 The latest graphic from asylum escapee Kevin DuJan is being excitedly passed around on Free Republic and other wingnut sites.  According to DuJan, the president only has support from blacks, gays, Muslims, and “stupid Jews.”  But Obama can’t even really depend on the gay vote, because “gay guys in particular are very flaky and might not bother showing up on election day.”  Interestingly, DuJan hasn’t been posting about “our next president, Sarah Palin” as much as he was last year, when that phrase worked its way into every other entry.

Previous Red-Caped Catholic Loons In Maine
Next American Family Asssociation: Keep Kids Out Of School In Case They Talk To A Gay