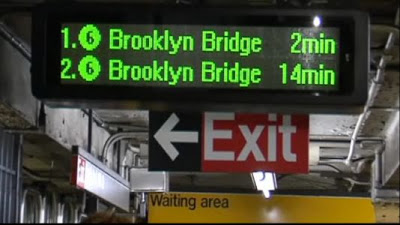 New York City’s MTA has announced that it will launch a smartphone app showing arrival times for some subway lines.

“The MTA is very close to being able to provide real-time train arrival data without having to go into the station,” MTA spokesman Adam Lisberg said. “We want everyone to access the countdown clocks on numbered lines just by looking at their phone.” The MTA also will be looking to the private sector to help riders get up-to-the-minute train information. “We’re going to release this data in a free and open stream so developers can build new apps that we haven’t even thought of,” Lisberg said. Gene Russianoff of the Straphangers Campaign praised the latest development in the MTA’s effort to provide riders with useful travel information. “It’s like having a subway countdown clock right in your home or your pocket,” Russianoff said. “It’s just the exact information riders want and need, especially at off-hours when trains arrive less often.”

The app will show arrivals for lines 1 though 6 only.  The anticipated launch date is some time “before the end of this year.”  The MTA says they will also provide “open code” to developers who want to create apps of their own.