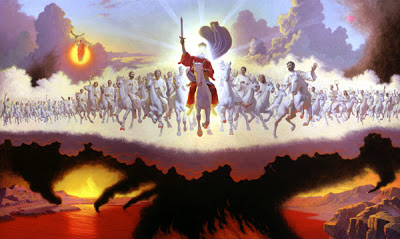 ISRAEL: Christian Networks Prepare For Live Coverage Of The Return Of Jesus

Jesus is apparently coming back any day now and Christian networks are ready to roll live coverage of the glory direct from Israel.

Daystar TV and the Trinity Broadcasting Network have set up cameras in studios overlooking the Mount of Olives, where scripture says the Christian Messiah will touch down one day. Both networks recently acquired studio space in Jerusalem as part of a miniature dust-up in their niche industry over who is doing more to preach the gospel to Jews. Daystar in particular has been very aggressive in deploying their messaging on Israeli airwaves, having launched the first 24-hour Christian network in the country back in 2006. The network’s website also features a live video stream from the Mount of Olives that’s compatible with a host of mobile devices like iPhones, iPads, Androids and Blackberries — just in case viewers need to catch the Messiah’s return on the go.

NBC, of course, will broadcast the Second Coming on a tape-delay. (Via JMG reader Win)