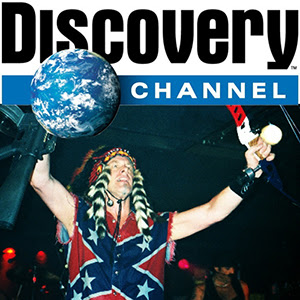 Last night, the Discovery Channel ran a one-hour special on guns that stars a fanatic who threatened to kill President Obama and other officials and was investigated by the Secret Service in April. In 2007, the Discovery Channel’s new star wielded two machine guns while yelling, “Obama, he’s a piece of shit. I told him to suck on my machine gun.” Then, raising up one the guns, he said, “Hey Hillary, you might want to ride one of these into the sunset, you worthless bitch.” Discovery’s new star is “Motor City Madman” Ted Nugent, who ominously warned in April that he would “either be dead or in jail by this time next year” if the president wins re-election. He then compared Obama and Clinton to a coyote that needs to be shot and called on his supporters to chop off Democrats’ heads in November. After those remarks were publicized by this blog, he was investigated by the Secret Service and commanders at Fort Knox cancelled his scheduled show there, citing his “public comments about the president of the United States.”

Hit the link to read on as Glasstetter eviscerates the Discovery Channel.

Previous Fischer: There Can Be No Dialog Or Compromise With Homosexuals
Next Tonight: JMG Meetup At The Edge