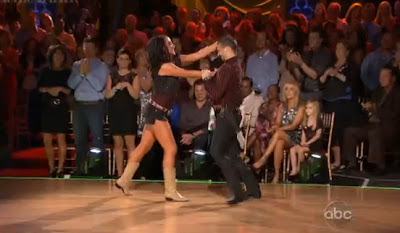 Dancing With The Rednecks

Self-described “redneck girl” Bristol Palin received the lowest score on last night’s edition of Dancing With The Stars after a country routine that ended with her smashing a beer bottle over her partner’s head. Mama Grizzly applauded wildly from the audience.
The judges were not amused:

“You slammed us in the face by saying we’re not gonna follow your rules,” chastised judge Carrie Ann Inaba, “so guess what? We’re slamming back.” “But,” she added, “I love watching you perform now.” Len Goodman said he too appreciated Bristol’s “fun enthusiasm,” but criticized her technique. “I liked the hoedown, but the technique was a bit low down,” he concluded. Not surprisingly, Bristol and Mark received the lowest score of the night, 18, and will likely be in jeopardy for the second week in a row on tomorrow night’s (Oct. 2) elimination show.

Before the dance began, Bristol was shown firing a machine gun at an indoor shooting range. That will bring in the votes.

Previous American Family Asssociation: Keep Kids Out Of School In Case They Talk To A Gay
Next Saturday: Furball New York City