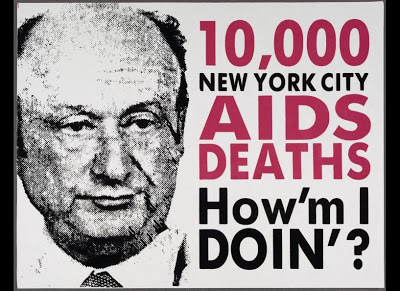 Poz.com blogger and renowned activist Peter Staley tips us that closeted former NYC Mayor Ed Koch has reviewed the AIDS documentary, How To Survive A Plague. Staley notes that Koch fails to mention his own detestable role in thwarting the early response to what would become a global pandemic. From Koch’s review:

While demonstrations were necessary to keep the issue on the front burner, Act Up protesters occasionally went too far, e.g., when they entered St. Patrick’s Cathedral, took communion hosts from the priest’s hands, and threw the wafers to the ground insulting many Catholics. Those wafers are, for Catholics, the Body of Christ.  The person who makes the greatest impact in the film because of his superb speaking ability is Peter Staley. In his New York Times review of this movie, Stephen Holden describes Staley as: “A former closeted Wall Street bond trader with H.I.V. who left his job and helped found the Treatment Action Group, an offshoot of Act Up. Self-taught in the science of AIDS, the group collaborated with pharmaceutical companies like Merck in the development of new drugs.”

Others named in the Times’ review as major leaders of Act Up, which began its activities in 1987, are Larry Kramer, Robert Rafsky and Ann Northrop, all of whom appear in the film. I don’t know if these individuals were ever honored by the White House for what they did in fighting government and powerful corporations. If not, I urge President Obama to do so by presenting them and other leaders recognized by Act Up with the Presidential Medal of Freedom. This superb documentary directed by David France should not be missed. Regrettably, when I saw it on a Sunday at 2:00 p.m., there were only about ten other people in the theater. I urge our Chancellor of Education to show the documentary in our public schools. It would teach children a lot of lessons, the chief one being the community can, working together, speak truth to power and win.

Larry Kramer himself has commented on the above-linked review in the manner for which he is best known:

What is this evil man up to as he approaches his death? Is he trying to make up to us? National Medals of Freedom from the White House! Would these provide a big enough enema to clean out his rotten insides? We must never forget that this man was an active participant in helping us to die, in murdering us. Call it what you will, that is what Edward Koch was, a murderer of his very own people. There is no way to avoid knowing that now. The facts have long since been there staring us in the face. If we don’t see them, then we are as complicit as he.