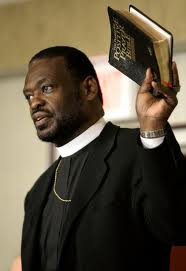 “One night I walked past one of those newsstands. As I was walking past it, I looked at that newsstand and they had some article about same-sex marriage and all that blasphemous stuff. And I laid hands on that newsstand and I said, ‘In the name of Jesus, I CURSE THIS PAPER!’ Less than two months, that paper went bankrupt. It was part of a six-newspaper chain! It went bankrupt! It went out of business! IT WENT UNDER! It did!” – Crackpot preacher Harry Jackson, presumably speaking about the Washington Blade, which as Good As You points out, quickly resurrected itself and remains in business three years after Jackson’s failed “curse.”  Hit the link for the audio and hear Jackson’s audience react.