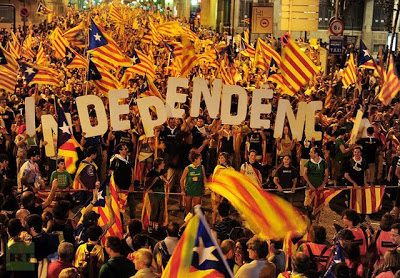 A million and a half people took to the streets of Barcelona, according to police estimates, to demand independence for the autonomous Spanish region of Catalonia as the country as a whole faces crippling debt. ­At least one train and more than 1,000 coaches were chartered to bring supporters from all over the region to the march. The mob filled the streets with red and yellow Catalan flags, rallying under the slogan “Catalonia, a new European state,” chanting “what do the crowds want? A new European state! What do the people want? An independent Catalonia!” A swelling unemployment rate combined with financial instability have fueled the secessionist spirit. Polls published on Tuesday show that 46.4% support the independence bid – twice as many as in 2008, when the financial crisis began, writes The Guardian. The autonomous Spanish community, whose economy is bigger than the entirety of neighboring Portugal’s, accounts for a fifth of Spanish output.