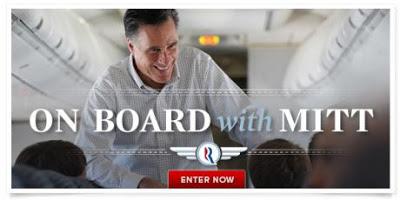 Romney: Fly With Me On Hair Force One

Not to be outdone by Beyonce’s pitch for Obama, Mitt Romney has launched another raffle of his own.

For a campaign donation of $15 or more, Mitt Romney says you can win a ride with him on “Hair Force One.” Yes, the GOP presidential nominee is poking fun at his hair in his latest contest promotion. Romney starts the e-mail pitch by acknowledging the nickname his wife, Ann, has dubbed his campaign plane. “Personally, I don’t quite know what to call it, but I do know it’s crucial in getting this campaign’s message to every corner of the country. And with just 54 days left until the election, we will be putting it to good use,” Romney says. No word on whether the “Fly with Mitt” sweepstakes allows the two winners to also touch the candidate’s perfectly coiffed ‘do.