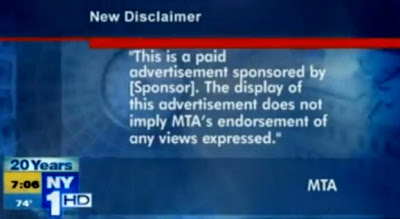 The Metropolitan Transportation Authority approved new guidelines for advertisements on Thursday, prohibiting those that it “reasonably foresees would imminently incite or provoke violence or other immediate breach of the peace.” The 8-to-0 vote by the authority’s board came three days after pro-Israel ads characterizing Islamist opponents of the Jewish state as being “savage” began appearing in subway stations, setting off vandalism, denunciations of the authority and calls for the ads’ removal. The authority had initially rejected the ads, citing their “demeaning” language. The group responsible for the ads, the American Freedom Defense Initiative, sued, and in July won a federal court ruling on First Amendment grounds. “We’ve gotten to a point where we needed to take action today,” Joseph J. Lhota, the authority’s chairman, said at a news conference on Thursday.

Yesterday’s contentious MTA meeting was attended by some of Geller’s most vocal detractors, who tried to shout her down when she appeared at the podium. About ten anti-Geller protesters were removed from the room by transit police.  Geller is claiming victory over the MTA decision.

The people who attended were for the most part OWS thugs, anarchists, and Jew-haters. They spoke as one violent and hateful voice, attacking the board members, attacking the system, attacking me, attacking everything they could. In this poisonous atmosphere, I was grateful to be given the opportunity to speak. I explained the context of the ad, how it was a response to the anti-Israel ads that ran in the subways with no complaints. Of course, these free speech crushers did everything they could to shout me down. They were escorted out quickly.