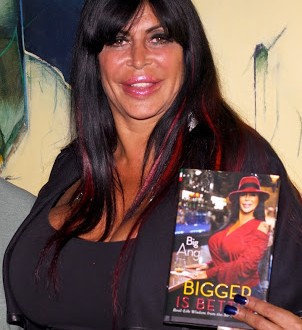 Last night my loyal photographer Dr. Jeff and I attended the launch party for the new book by Mob Wives breakout star Big Ang, whose own show debuted this summer. Immediately upon our arrival promoter Chip Duckett hustled us to a downstairs lounge where Ang and I chatted about her Staten Island nightclub, the Drunken Monkey, which recently began hosting a night called TuesGays. “Oh my gaaawd, Joe, the place is fricken packed!”

Back upstairs we chatted with Mob Wives stars Ramona and Karen and Big Ang cast member Linda, but much to the dismay of the bear contingent in the room, the histrionic Renee and her (sometimes) best pal and hair-pulling champion Drita were not in attendance. Later I worried Boy Culture blogger Matt Rettenmund somewhat when I too-loudly began speculating about what seemed to be gun bulges under the suit jackets of some of the large men quietly observing the goings-on. Thank you, open bar.