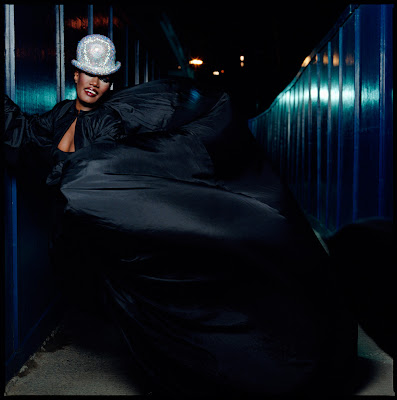 Jamaican-American singer, actress, and model Grace Jones has announced that she will be returning to her hometown for an exclusive one night engagement at the Roseland Ballroom in New York City on October 27th. The show concept, which was created by couture UK milliner Philip Treacy, will be a spectacular union of fashion and rock. She has 15 wardrobe changes, including clothing by designers Issey Miyake, Jean Paul Gaultier and Alexander McQueen, while performing the songs that made her an international icon. Tickets are available via a Ticketmaster pre-sale on Monday, September 10th starting at 9:00am and will be on sale to the general public on Tuesday, September 11th starting at noon. Press HERE and use the pre-sale code, “JOSHWOOD” to reserve your spot on Monday to attend what is sure to be one of the most talked about events of the Fall season.

Grace Jones last played NYC in 2009 at the Hammerstein Ballroom. That show was amazing.

Previous New Study: No Effect From DADT Repeal
Next NOM: Marriage Is From God Only And Pastors Better Not Ever Forget That