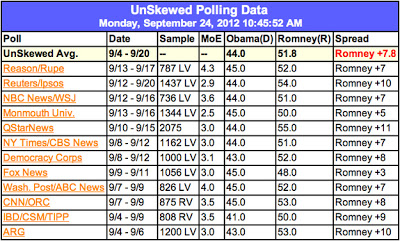 Republicans have taken their complaints about media polls allegedly favoring Democrats a step further this morning, embracing an obscure new polling website that re-engineers public polls to add more Republicans to their samples, and which gives Republican Mitt Romney a wide lead. Some Romney supporters have long complained that public polls suggest higher Democratic turnout, and lower Republican turnout, than they think is likely this year. Pollsters have replied that their samples are dictated by what poll respondents themselves say.

I can’t wait to hear what Nate Silver says about this.

Previous Mitt Romney: I Don’t Understand Why The Windows On Jetliners Don’t Open
Next Headline Of The Day