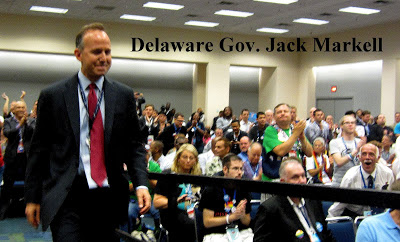 A galaxy of the Democratic Party’s top stars literally waited in line outside the jammed LGBT Caucus ballroom today for a turn to address the overflow audience of activists, journalists, and delegates. Newark Mayor Cory Booker, who entered to chants of COR-REE COR-REE, sent reporters flying to their Twitter accounts when he broadly hinted that he’d be the one to approve marriage equality in New Jersey when he becomes governor. Similarly, Delaware Gov. Jack Markell vowed that his state too would soon advance from civil unions to full marriage rights.

Sen. Al Franken demanded support for his federal anti-bullying bill, the Student Non-Discrimination Act, and Democratic National Committee Treasurer Andrew Tobias rallied the troops to get out the vote. Second Lady Jill Biden, who was received like a rock star, spoke briefly in LGBT-supportive generalities then was whisked out of a side door. Secretary of Labor Hilda Solis followed but I’d stepped out for a better photo of Mrs. Biden and missed much of her speech. Obama campaign manager Jim Messina followed and pointed out the openly gay White House social secretary in the audience.

The star power in the room was not limited to the dais as recently hired HRC president Chad Griffin and NLGTF head Rea Carey looked on from the front rows. Most would agree, I think, that we have truly entered a new era when virtually every top official from the nation’s in-power political party vies for face time in front of LGBT activists. Speaking directly to us this week we’ve had cabinet members, top-ranking members of the Senate and House, state governors, rising stars, and the First and Second ladies. A new era.