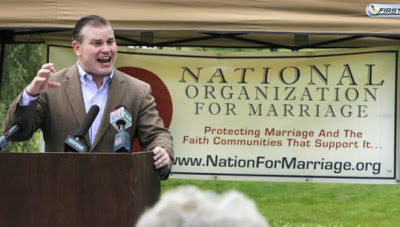 When It Comes To Hate, NOM Is There

Box Turtle Bulletin writer Rob Tisinai ticks off just a few of the many, many times NOM has spread a message of hate against LGBT Americans.

Regarding the first item, I was there in the Bronx that day last year when NOM’s invited speaker declared that gay people should be put to death, first in Spanish, then in English via the onstage translator. When I heard the translation, I whipped my head around to see Brian Brown smiling and rocking his heels as he nodded in approval.

Previous Loesch: Gays Are At War With Religion
Next SPLC Condemns Tony Perkins