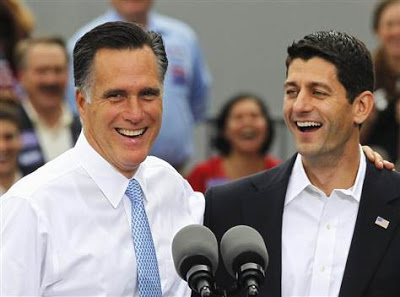 US History: Romney/Ryan First Ever Presidential Ticket Without A Protestant

Immediately upon the news that Paul Ryan had been selected, I quizzed folks here and on social media whether we’d ever had a major presidential ticket without a Protestant. There was a lot of pondering, particularly on whether Quakers (Richard Nixon) are considered Protestants. The National Journal apparently doesn’t think so.

In 1928, New York Governor Al Smith, a Democrat, was the first Catholic to sit atop a major party ticket, but his nomination was balanced by Arkansas Sen. Joseph Taylor Robinson, a Protestant who was outspoken against anti-Catholic bigotry. They lost in a landslide to Republican Herbert Hoover. Since then, John Kennedy was the only non-Protestant to ever win at the top of the ticket. Other than Romney, the only other recent non-Protestants to head a presidential ticket were Sen. John Kerry, D-Mass., in 2004 and another Massachusetts governor –1988 Democratic nominee Mike Dukakis is Greek Orthodox. Before Ryan’s pick, Rep. Geraldine Ferraro, D-N.Y. and current Vice President Joe Biden were the only Catholic politicians ever selected for the number-two slot. Al Gore picked Sen. Joe Lieberman, an Orthodox Jew, as his running mate in 2000.

So far I’ve seen little grousing about this from the teavangelicals, but give it time. And of course, the Tea Party has long claimed that there are no Protestants on the Obama/Biden ticket.