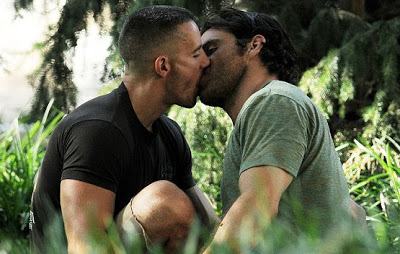 Britain’s Daily Mail tabloid apparently stalked the boyfriend of Anderson Cooper to “bust” him with a long lens as he macked on some unidentified man in an unnamed NYC park. Cooper, as you may know, is rumored to be getting married very soon and the photos will surely be posted on anti-gay sites as “evidence” that gay people don’t really want marriage for themselves, they just want to destroy the institution entirely. The Daily Mail writes:

There was no hint of upset from Cooper last night who looked typically sharp in a navy suit as he joined other A-listers in New York to watch Beyonce perform at the UN headquarters for World Humanitarian Day. It is believed that Cooper has been dating Maisani, who owns gay bar Eastern Bloc in Manhattan’s East Village for around three years. The couple live together at Cooper’s converted fire station townhouse and enjoy a low-key lifestyle, working out and going to dinner with friends including Sarah Jessica Parker and Matthew Broderick. They were encouraged to marry last year by Anderson’s mother, designer Gloria Vanderbilt. She reportedly helped the pair patch up their relationship after they struggled with conflicting work schedules.

The number of fucks we should give about this: ZERO.