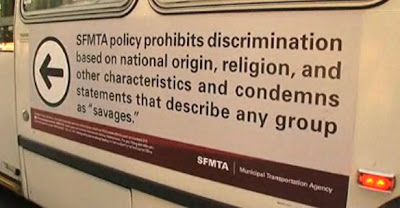 Pam Geller’s anti-Islam ads on San Francisco’s mass transit system are now paired with the above message. And she is LIVID: “The city of San Francisco condemns calling any group savage. I say we buy the SFMTA a one-way ticket to Taliban country, eh?” Earlier this month Geller won a court battle to place the same message on New York City transit.

RELATED: Norway’s convicted mass murderer Anders Breivik defiantly presented a Nazi-esque salute as he was led away to prison. Brevik was a participant in Geller’s blog and cited her words at length in a deranged manifesto published after he murdered 77 people, most of whom were teenagers.