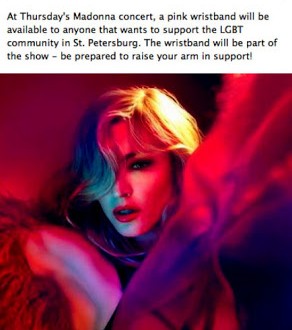 Earlier this year St. Petersburg authorities warned that they would arrest Madonna should she violate the city’s new law against “homosexual promotion.” From the above it’s apparent that Her Madjesty is going to go for it at tomorrow’s concert. As noted in a post several below this one, yesterday Madonna further drew the ire of the Russian government when she expressed support for the anti-Putin female punk band Pussy Riot. (Via Towleroad)