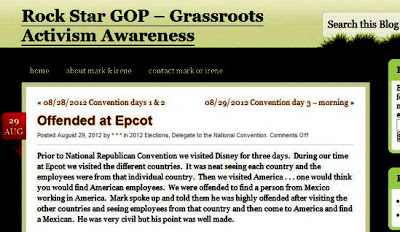 RNC Delegate Is “Highly Offended” That “Mexican” Is Working At EPCOT

During a trip to Epcot at Disneyworld, Pennsylvania delegate Mark Harris and his wife were shocked and offended to find a Mexican employee working at the amusement park’s American pavilion, which showcases the different cultures in the United States. According to the couple’s blog, Harris complained to staff that he was “highly offended” that a “person from Mexico” was working in the American pavilion when other nations’ pavilions were staffed by people from each respective country.

Hometown GOP officials in Harris’ district are falling over themselves to disavow his words.