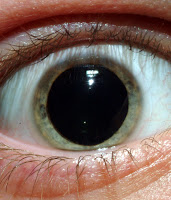 For the first time, researchers at Cornell University used a specialized infrared lens to measure pupillary changes to participants watching erotic videos. Pupils were highly telling: they widened most to videos of people who participants found attractive, thereby revealing where they were on the sexual spectrum from heterosexual to homosexual. [snip] The new Cornell study adds considerably more to the field of sexuality research than merely a novel measure. As expected, heterosexual men showed strong pupillary responses to sexual videos of women, and little to men; heterosexual women, however, showed pupillary responses to both sexes. This result confirms previous research suggesting that women have a very different type of sexuality than men. Moreover, the new study feeds into a long-lasting debate on male bisexuality. Previous notions were that most bisexual men do not base their sexual identity on their physiological sexual arousal but on romantic and identity issues. Contrary to this claim, bisexual men in the new study showed substantial pupil dilations to sexual videos of both men and women.

Remember, you choose to widen your pupils at Ben Cohen.