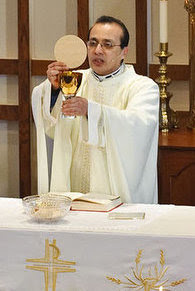 OREGON: Catholic Priest In His Underwear Chases Boy Down Street After Abuse

Wearing only his underwear, last week Rev. Angel Armando Perez chased a 12 year-old Oregon boy down the street after pulling the sleeping child’s pants down to take a cell phone photo.

It was close to midnight Sunday when Woodburn resident James Curths saw the 12-year-old boy running down the street toward him. Curths said the child, panting and out of breath, begged for help, telling him a man was chasing him. Moments later, a man rounded the corner wearing only underwear. He stood a short distance away, trying to wave the boy over as Curths and his sister-in-law prepared to drive the boy to relatives. “He was staring at us,” said Heather Rodriguez, 28, Curths’ sister-in-law, who was also outside. “Then he stood there with his hands on his hips like, ‘You’re really not going to give him to me?'” Rodriguez and Curths, 35, told the man they were calling the police. Only then, they said, did the man jog away.

Perez claims that he was so drunk that he has no memory of the incident. He’s been charged with multiple felony counts including first degree sexual abuse. The victim’s parents had given Perez permission for the boy to sleep at his house before a camping trip.

Previous Ecuador Grants Asylum To Assange
Next NEW YORK CITY: 84% Of Residents Say They Wouldn’t Object To A Gay Mayor