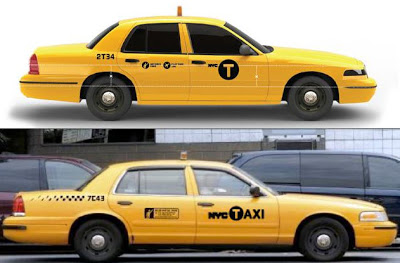 NYC’s new taxi design removes the last vestige of the old checkered cabs. Even the oft puzzled over “AXI” is going away. The New York Times reacts:

What’s next? “T Driver,” starring Robert De Niro? Not likely, even though the new logotype for medallion taxis, which is beginning to appear on New York streets, has eliminated the word “taxi” in favor of a bold yellow T in a black circle; an enlarged version of the symbol first adopted five years ago. David S. Yassky, the chairman of the city’s Taxi and Limousine Commission, sounded confident on Tuesday that the change would not confound anyone. “We have no doubt that a yellow car with a roof light with a big T will be understood as a New York City taxicab,” he said. “Even the greenest of greenhorns will know that it’s a taxicab.”

Also gone is the fare rate card on the door, which nobody ever read anyway.