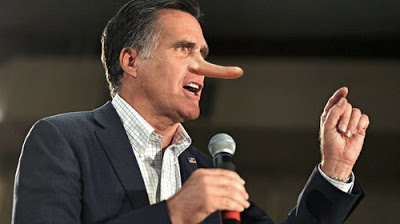 The New York Times has published a lie-by-lie refuting of Romney and Ryan’s RNC speeches. An excerpt:

Representative Paul D. Ryan used his convention speech on Wednesday to fault President Obama for failing to act on a deficit-reduction plan that he himself had helped kill. He chided Democrats for seeking $716 billion in Medicare cuts that he too had sought. And he lamented the nation’s credit rating — which was downgraded after a debt-ceiling standoff that he and other House Republicans helped instigate.

And Mitt Romney, in his acceptance speech on Thursday night, asserted that President Obama’s policies had “not helped create jobs” and that Mr. Obama had gone on an “apology tour” for America. He also warned that the president’s Medicare cuts would “hurt today’s seniors,” claims that have already been labeled false or misleading. The two speeches — peppered with statements that were incorrect or incomplete — seemed to signal the arrival of a new kind of presidential campaign, one in which concerns about fact-checking have been largely set aside. [snip]

In his floor speech, Mr. Romney repeated his widely debunked charge that Mr. Obama had gone on an “apology tour” on America’s behalf — an accusation he feels so strongly about that he laid out his own worldview in a 2010 book he titled “No Apology.” But independent fact checkers have called the accusation a distortion, and it is hard to find evidence that Mr. Obama ever said he was sorry for the United States.