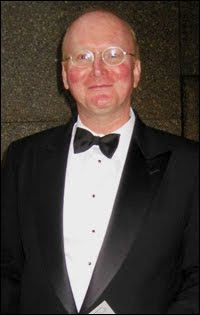 Openly gay playwright and humorist Mark O’Donnell, who won the Best Book Tony Award for the Broadway show Hairspray, died of cardiac arrest yesterday near his Manhattan home at the age of 58. Playbill reports:

Hairspray co-songwriter Marc Shaiman told Playbill.com on Aug. 6, “Mark was a kind soul, a hysterical mind and the real hero of Hairspray. His passing is shocking, our great loss, but heaven’s gain.” His plays include That’s It, Folks!; Fables for Friends; The Nice and the Nasty; Strangers on Earth; Vertigo Park and the musical Tots in Tinseltown. He collaborated with Bill Irwin on an adaptation of Moliere’s Scapin and co-authored a translation of Georges Feydeau’s A Flea in Her Ear. He also adapted Feydeau’s Private Fittings for the La Jolla Playhouse and a symphonic version of Pyramus and Thisbe for the Kennedy Center. Mr. O’Donnell published two collections of comic stories “Elementary Education” and “Vertigo Park and Other Tales” (both Knopf) as well as two novels, “Getting Over Homer” and “Let Nothing You Dismay” (both in Vintage paperback). His humor, cartoons and poetry have appeared in The New Yorker, The New York Times, The Atlantic and Esquire. He has received a Guggenheim Fellowship and the George S. Kaufman Award.

O’Donnell is survived by his (straight) identical twin brother, who is the head writer on the Jimmy Kimmel Show.