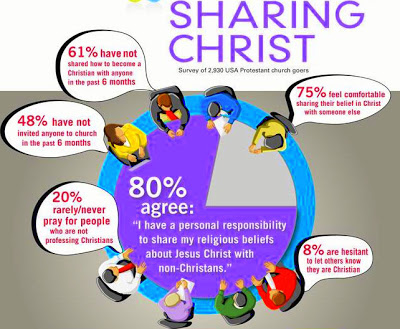 The Christian Post laments a new study which shows that only 39% of evangelicals have tried to convert a sinner in the last six months.

A majority of churchgoers in the U.S. believe that it’s essential to share their faith with non-believers, but a large number of those are not doing so, according to a recent study of American Protestants conducted by LifeWay Research. “When it comes to discipleship, churchgoers struggle most with sharing Christ with non-Christians,” says LifeWay spokesperson Jon D. Wilke. The study found that 80 percent of those who attend church one or more times a month believe they have a personal responsibility to share their faith, but 61 percent have not told another person about how to become a Christian in the previous six months.

The study is meant “mobilize the troops” to get in the face of non-believers.