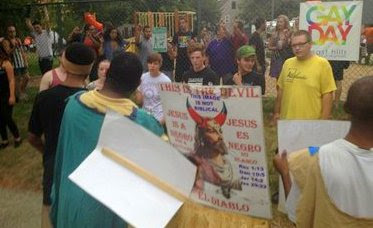 Last week a woman attending a gay celebration in a Grand Rapids park secretly recorded a group of Black Hebrew Israelite preachers as they threatened to rape and murder the gay out of her. David Edwards reports at Raw Story:

In a video posted to YouTube, several protesters with Bibles can be seen shouting at a woman celebrating in the inaugural “Gay Day” celebration, an event organized by the human rights group Tolerance, Equality and Awareness Movement (TEAM) to showcase the community’s diversity. “Back in the day there was no free power, there was no going to the mall,” one protester tells the woman. “There was, ‘sit your ass in this house until I bring my ass home.’” “And if your ass get to going out there like you said, guess what?” a second protester adds. “You get raped. And that’s what’s going to happen to you. … Keep your pussy clean, that’s all you need to do. Do you understand?”

After one man claims, “the Lord said that,” the woman challenges him to find the corresponding Bible verse. He responds with Isaiah 13: “Their children also shall be dashed to pieces before their eyes; their houses shall be spoiled, and their wives ravished.” “What does ‘ravished’ mean? It means, we going to rape your ass,” the protester explains. “And I’m going to have fun doing that shit. And you going to like that. I promise you.” After briefly arguing that he is misinterpreting the Bible, the woman observes, “Anything I say, you say it doesn’t matter.” “It’s going to matter right now,” the man shoots back. “It’s going to matter when your clothes off and I’m going inside of you repeatedly. That’s when it’s going to matter. Because you going to enjoy yourself.”

TEAM is demanding that the police take action. Officers summoned to the scene with a 911 call had refused to intervene, saying they had not witnessed any threats themselves and that the preachers had not broken any local protesting laws. According the woman, the men recited her boyfriend’s license plate number back to her and vowed to track her down.

The Southern Poverty Law Center has been following the Black Hebrew Israelites for years. The Harlem-based chapter can often be found screaming “faggots!” at tourists in Times Square. Below is a local news report that contains excerpts of the woman’s video, which she has deleted from YouTube, presumably out of fear of being found.