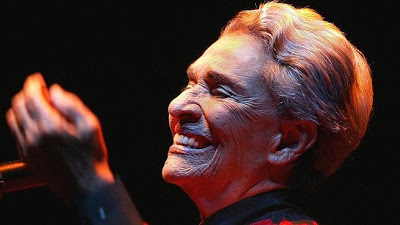 Most Americans may not know the name of Chavela Vargas, but foreign film buffs will recognize her distinctive voice from the soundtracks of Pedro Almodavar’s movies. Vargas died yesterday at the age of 93.

Vargas rose to fame flouting the Roman Catholic country’s preconceptions of what it meant to be a female singer: singing lusty “ranchera” songs while wearing men’s clothes, carrying a pistol, drinking heavily and smoking cigars. Though she refused to change the pronouns in love songs about women as some audiences expected, many of her versions of passionate Mexican folk songs are considered definitive. Born in San Joaquin de Flores, Costa Rica, on April 17, 1919, Vargas immigrated to Mexico at age 14. She sang in the streets as a teenager, then ventured into a professional singing career well in her 30s.

“I was never afraid of anything because I never hurt anyone,” Vargas told the audience at a Mexico City tribute concert in June 2011. “I was always an old drunk.” Vargas recorded 80 albums, becoming a major figure in Mexico City’s artistic explosion of the mid-20th century. She was a friend and a frequent house guest of the Mexican painters Frida Kahlo and Diego Rivera and was close to the Spanish writer Federico Garcia Lorca. Along the way she was honored as a “distinguished citizen” of Mexico City and was given Spain’s Grand Cross of Isabella the Catholic. In 2007 the Latin Recording Academy gave her its lifetime achievement award.

Although it had been widely known among her fans for decades, Vargas did not publicly confirm being a lesbian until the age of 81. The first clip below is a trailer for Almodovar’s 2009 film, Broken Embraces, which features Vargas singing the Mexican standard, Piensa En Mi.