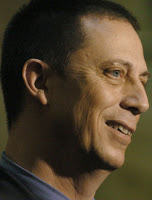 Maryland police are weighing felony charges against virulently anti-gay state Del. Don Dwyer after he was found to have a blood alcohol level at well more than twice the legal limit when he crashed his boat into another one, seriously injuring six people, including himself. Four of those injured are children. UPDATE: Police say that Dwyer self-reported a blood alcohol level of .20. The police test taken at the scene is not expected back for two weeks and the cops say they have no idea where Dwyer came up with that number. It’s possible the hospital tested him too. The legal limit in Maryland is .08.

Dwyer was in a wheelchair with a neck brace on and a cast around his left foot during the news conference outside Maryland Shock Trauma Center. He spoke from prepared statements and answered no questions from reporters before being wheeled back into the hospital by a nurse. Sgt. Brian Albert, a spokesman for the Department of Natural Resources Police, said investigators suspected alcohol was a factor in the accident. He said Dwyer had one passenger, identified as John Edward Moran IV. Dwyer had not been charged with a crime as of Thursday evening. A legislator convicted of a felony crime or a crime of “moral turpitude” must relinquish his or her seat.

RELATED: You may recall that last year Dwyer sat next to Maggie Gallagher during Maryland’s marriage equality hearings, telling the committee that any state delegate that testified in favor of the bill should be “arrested for perjury” because saying that gay people deserve equality “is a lie and they know it.” During the hearings Dwyer presented documents from the SPLC-certified hate group, MassResistance, claiming that gay activists want to introduce sadomasochism to grade school children. Dwyer also recorded an anti-gay robocall for NOM. (Tipped by JMG reader Stuart)

Previous It’s Not A Gun Crime If Liberals Shoot Somebody, Liberals Hate Freedom
Next Live From Tampa