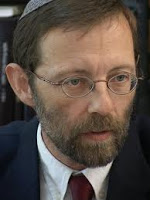 “Homosexuality has long ceased to be a sexual deviation, belonging to individuals and their private lives, which no one wants to interfere with.They came out of the closet a long time ago and are now the spearhead of the ‘post-‘ culture. We are dealing with the undermining of the family unit, which is the basic building block of every national society. Throughout history from Rome to Europe in our day, the approval and spread of homosexuality presaged the decline of nations and cultures. If one reads the Torah portion ‘Noah’ – this comes as no surprise. The organizers of a pride parade do not wish to gain rights. They strive to force homosexuality as a culture upon the public sphere.” – Moshe Feiglin, head of the Likud’s Jewish Leadership group. In the past Feiglin has said that the Nazi Party was made of up “thugs and homosexuals.”

Yesterday another Jewish group once again brought donkeys to Jerusalem Pride as a protest against “the bestiality of the parade.” Last year the donkeys were accompanied by signs such as the ones below and others in Hebrew which read, “Sick perverts get back to the closet that you came from.”

VIDEO: Donkeys aside, the parade drew 4000 marchers and took place without incidents.